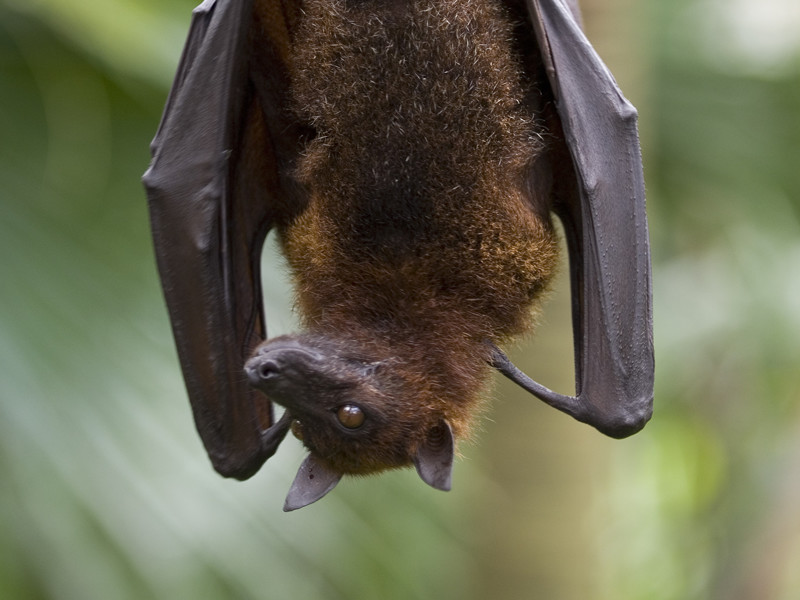 The Fruit Bat falls into the category of the Megabat and sometimes they are called the Flying Fox in some locations. There are many differences in their size from one location to the next. Due to that variation these bats are often mistaken for many different types rather than being identified as the same.

For example some Fruits Bats are no more than two inches long. Others though are more than 16 inches in length. Some of them only weigh an ounce or two and others weigh in at a couple of pounds. The overall wing length of the Fruit Bat can be more than five feet. These bats have large eyes and they also have excellent vision.

In fact, the Fruit Bat is said to have the best overall vision of all bat species. They use their vision in conjunction with their sense of smell so that they are able to find their food sources. These senses also serve to help them avoid dangerous situations. They are a big type of bat and they are said to be among the most unique of the more than 1,200 species that have so far been identified.

The Fruit Bat have the best overall vision of all bat species.

The Fruit Bat has some sharp teeth that allow it to penetrate the skin of the fruits. They also have very long tongues that unroll when they are feeding. When they aren’t eating the tongue rolls back up. It is tucked away internally around the rib cage rather than remaining in the mouth.

The shape of the wings on Fruit Bats can be very different based on location. Many experts believe that this type of anatomy difference has to do with the fact that they live in different areas and have different types of fruit trees that they eat from. The wings may be certain designs to help compensate for wind and other elements in their natural environment.

Since most species of bats consume insects, the Fruit Bat is one that people are interested in. It is believed that they turned to eating in such a manner in order to help them survive. Circumstances could have warranted them deciding to consume a different type of food source in order to compensate for not enough insects being around.

The evolution process though is one which can be very complex. We simply don’t have enough information to make accurate determinations. Experts are hopeful though that one day they will find additional clues that put it all into perspective for them. 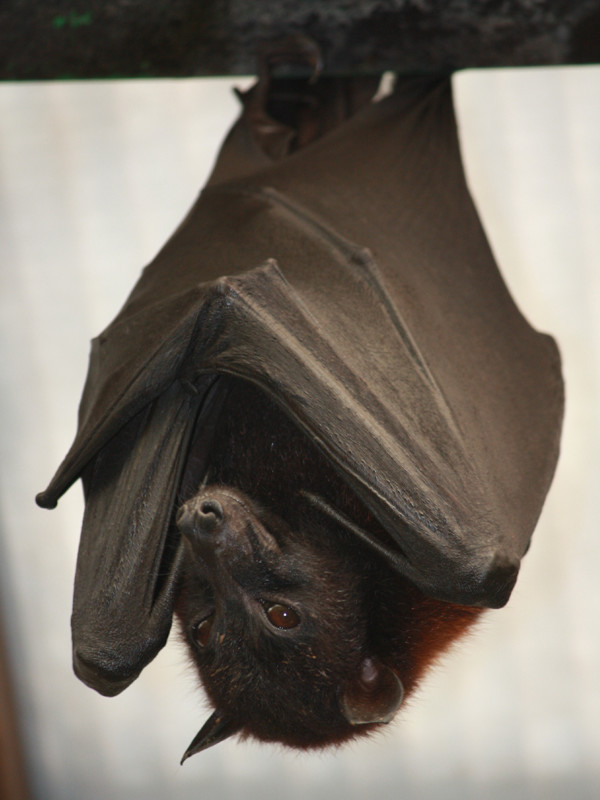 The very long wings of the Fruit Bat do much more than just allow it to fly. They also allow them to stay warm during roosting. They wrap up in those wings to conserve their body heat. They live in colonies that are very large in size because they feel safer with numbers.

Inside of each colony of Fruit Bats though you will find various sub colonies. Each of them has one male and approximately eight females. They form very close bonds with their sub groups.

There are locations throughout the world where the Fruit Bat is able to successfully thrive. They tend to live in areas that offer them plenty of food. Where you find thick forest regions with lots of fruit trees, you can be confident they are in abundance. Most of them live in warmer climates where they can take advantage of various fruits that will grow throughout the year.

They may have to travel for long distances during certain times of the year in order to find food.

They may have to travel for long distances during certain times of the year in order to find food. They will make the journey back to their roost though before the sun comes up. Sometimes such efforts don’t leave the Fruit Bat much time at all to find lots of food though.

When the Fruit Bat roosts during the day, they do so high up in the trees. This gives them darkness and it also protects them from various predators. They may hide in crevices and other dark spaces as well. They will typically stay close to bodies of water. 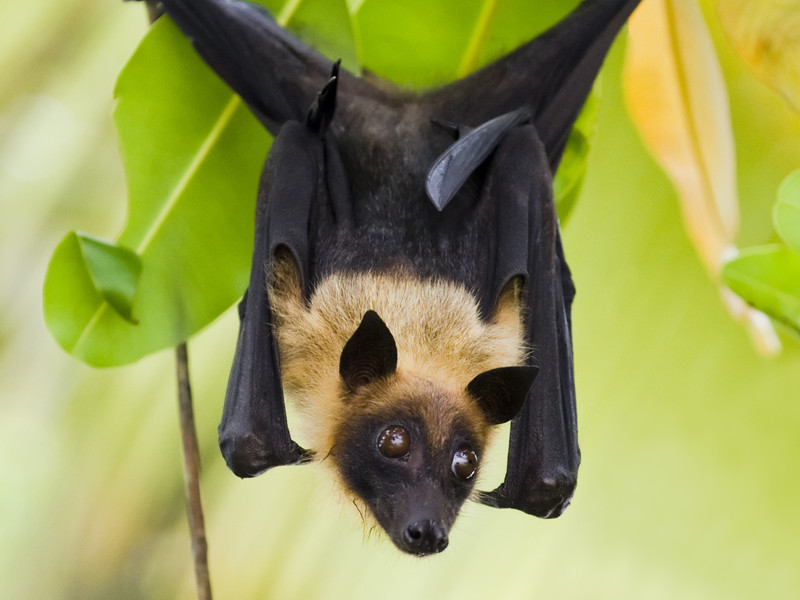 They use both vision and smell to find food.

There are hundreds of known types of fruits that grow on plants and trees that the Fruit Bat is able to consume. They don’t eat all of the fruit though like so many people believe that they do. Instead, they use their teeth to crush into the fruit. Then they will consume the nectar.

They use both vision and smell to find food. There is one known subspecies though that is believed to rely on echolocation to find their sources of food. With a Fruit Bat they can either linger in air and eat or they can land and eat it. The larger they are in size though the more difficult it is to consume food without landing first.

Once mating has occurred they will carry the young in their bodies for about six months. The females will give birth to only one young at a time. It is going to be fully dependent upon her as the wings aren’t strong enough until they are six weeks old for flying.

The young will stay with their mother, even when she is out looking for food. They will cling to her body with claws that allow them to effortlessly remain in place. The Fruit Bat won’t take part in mating when they are struggling for habitat or to find food. It is believed this is a natural process for them that allows them to ensure overpopulation doesn’t occur in any given area where they live.

Due to the location where the Fruit Bar lives they don’t have too many natural predators. Sometimes they do encounter them though depending on their location. Various types of birds including the hawk and eagle can attack them while still in flight. Sometimes in the trees they may be eaten by snakes or weasels.

Sometimes in the trees they may be eaten by snakes or weasels.

In some areas the Fruit Bat lives very close to humans. Therefore it is possible for house cats to get them as well. In fact, some people don’t even know they have bats living in their trees until they end up finding their cat carrying one around with them.

Humans are also predators of the Fruit Bat. People that realize they have such creatures living in their trees take measures to get rid of them. These bats can get into the attic or other areas of the home as well. Usually a professional exterminator is called to remove them and to clean up after them.

Humans that want the fruit from these trees to themselves also don’t want the Fruit Bats around. However, it is important for humans to realize that the Fruit Bat helps to create more fruit by dispensing the seeds. When they fly around they will spit them out all over the place.